Cultural Correspondence (1975-83) was a remarkable US-based radical journal with a particular focus on popular culture. Its entire archive is now available online and is a real treasure trove. I've been browsing through a 1979 special on surrealism, which has lots of music and dance related content. The following text is by the American philosopher Horace Meyer Kellen (1882-1974), an extract from his 1942 book Art and Freedom. I would certainly take issue with its association of jazz and swing (and by implication black people) with the 'primitive' - these developed as modern urban musics created by sophisticated virtuoso musicians. But the text does express very well the enthusiasm of its followers in that period for a music that seemed to embody liberation:

'The musical equivalent of surrealism in painting and literature is not obviously connected with either its theory or practice. It develops as a practice entirely innocent of theory, as an unwilled expression of alogical spontaneity, of irresponsible, personal invention unenchanneled by form, unchecked by musical knowledge or learned tradition; develops thus with all the differentiae which the connoisseurs ascribe to surrealist creations. The name for it is Swing. Its native habitat is the United States of America, and it is indigenous to the southern portion, especially to the Mississippi riverfront at New Orleans. Unlike its literary and pictorial parallels, which sustain a local life already below the level of subsistence among selected groups of intelligentsia, Swing has attained a world-wide diffusion among all classes and occupations. The event is natural enough. Verbiform and graphic symbols require interpretation; sheer sonorous rhythm does not. Swing is caused in a medium which issues from and speaks to Dr. Freud's Unconscious direct, without disguise, without distortion...

...Swing arrived as the latest phase of a progression from Ragtime through Jazz. The trick of heightening emotional tension by opposing one rhythm to another became conspicuous as a practice about the same time that post-impressionism made its start. The matrix of Swing is said to have been opposed and mixed body-rhythms of the pasmala as danced in New Orleans bawdy-houses and honky tonks. The manner of mixing and opposition was carried over from dancing bodies to  sounding musical instruments. Popular songs so treated were said to be "ragged," and the treatment came to be called Rag-time. The singers and dancers and players who devised Ragtime were American Negroes with remnants of an eroding African culture in their body-rhythms, in their social habits and in their personal outlook. They were primitives indigenous to industrial civilization, with its timeclocks, its rigid divisions of the hours of the working day, its patterns of machine-logic and rationality. Negro Ragtime was the beginning of a break from that. In less than a generation the Negro's social heartbreak was absorbed into Ragtime's terpsichorean breakdown and Ragtime transmuted to Jazz. The vehicles of the American Negro's heartbreak is the Spiritual and Jazz, which is said to derive from jaser, an Acadian word meaning to gabble, to chatter, is the compenetration of the rag and the spiritual. Body, voice, wind and percussion instruments are its vehicles.

Jazz began to spread through the great industrial cities of the North American continent about the same year that the First International Exhibi-ion of Modem Art began its epoch-making trek across the States. This exhibition, which for the first time brought before the unaccustomed eyes of Americans the works of all the schools and cults that Europe had bred in two generations, had been arranged under the auspices of the Association of American Painters and Sculptors. Ragtime, which might be said to correspond to the cubist phase of the pictorial and verbiforrn arts, spread to Europe while modernist painting and poetry were acquiring a vogue in America. The four years o' the First World War were a plowing of a cultural soil wherein Jazz could take deep roots, and when the War ended it flowered indeed. . . .

The metronomic noises of the railroads and factories, the monotonous roar of the cities de-manded their rhythmic compensation. Even  formal music brought them forth. Percussion and wind instruments — brasses, saxophones, trombones, xylophones, bells — became more noticeable in orchestras. To atonality or to polytonality, which dropped modulation, which set key against key and scale against scale, was joined a continuous shift of rhythm or a contrapuntal opposition of many rhythms. In 1893, Dahomey Negroes, beating tom-torns for the entertainment of gaping Americans at Chicago's World Fair, had, by using feet and heads as well as hands, produced a triple cross rhythm which constituted an unconscious counter-point of rhythms. . .

Formal professional music, however modem, somehow failed to release the emotions which the industrial workday blockaded and starved. Night, that so long had been the time, not for living, but for sleeping away the fatigues of the living day, became conspicuously the time for living. The existence of the folk of the industrial cities is now a cultural schizophrenia of day-life and night-life. Day is the time when they earn their livings, night is the time when they live their lives. During the day most people are producers, disciplined to the machine, their bodies held to its rhythm, their minds constrained to its motions. By night, they are consumers; their body-rhythm seeks to recover its native physiological patterns, their movements search to resume the human form appropriate to autonomous human function. The extraordinary spread and influence of Swing testifies that in it the seeking and searching come to a haven; that it owns the power of gratifying the needs which launch them. Also its well-spring is the Negro of the urban jungle in New Orleans; also its centers of power are the great industrial areas — Chicago, New York, London, Berlin, Moscow, Shanghai, Tokyo.

Atonal, polyrhythmic, Swing cuts itself loose from every rule and canon that tradition has brought down or craftsmanship confirmed. It asks of the performer two things, a maximum of virtuosity on his instrument, a maximum of spontaneity in his performance. That must needs be sheer, unrestricted improvisation, the free, the anarchic expression of his Unconscious, undisguised and unashamed. Nor is the expression sonoriform only. His whole body collaborates: as he plays, he dances, he acts, he sings, he leaps and twists and weaves like an acrobat, and the different behaviors pass seamlessly into and out of one another. He becomes the leader, not only of his band, but of his audiences: they step from their seats into the aisles and dance with him in an ecstasy — orgiastic or mystical or both according to the observer's lights — of release and self-recovery. It is the liberation of Dionysos from Apollo, of the living organism from the automatic machine, an insurgence of the depths into a conscious experience without connection and without analogue, though perhaps revivalist religious gatherings do enfold likenesses wherein convert and jitterbug are one under the skin. Swing might with good reason be called surrealism in excelsis'. 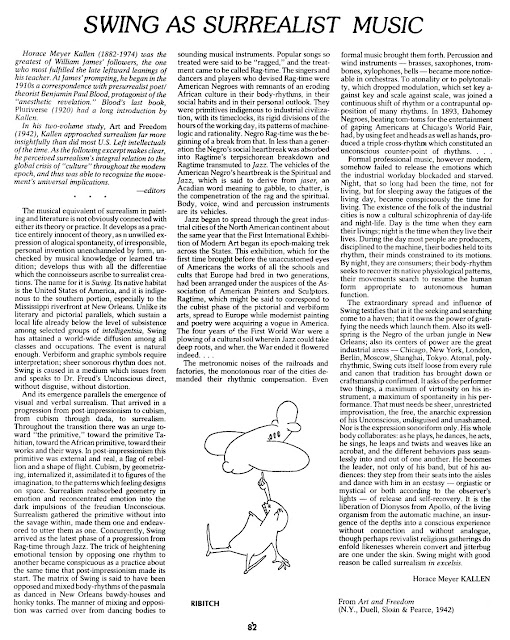 Posted by Transpontine at 7:46 pm