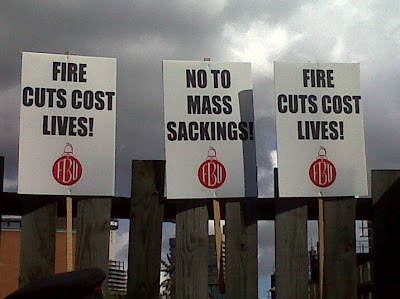 A couple of weeks ago (16 September) I wandered down to the Waterloo headquarters of the London Fire Brigade, where hundreds of firefighters were staging a protest outside a meeting of the London Fire and Emergency Planning Authority (LFEPA). They were demonstrating against management proposals to impose new shift patterns - with the threat of mass sackings if they don't comply.

One thing I noticed was a new instrument of protest - the vuvuzela. The plastic trumpet beloved of South African football fans has now circulated around the world following the exposure given to it in this summer's world cup.

I saw a few firefighters blowing vuvuzelas to cheer speakers: 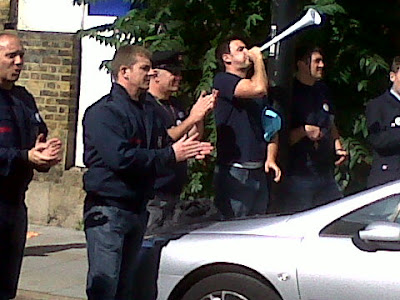 Seemingly back in June, firefighters staged a specific vuvuzela protest outside a similar management meeting:

So as cuts and austerity take effect, is the vuvuzela going to be the sonic weapon of choice for the strikers and demonstrators of 2010-11?

Posted by Transpontine at 8:16 am

Certainly here in Sweden it's the big anti-racist demonstration trend, during the election campaign this fall it's been ever present both as assertion and as sonic disturbance (of the extreme right).

I think it might be heartening for you to know, by the way, that one of the best events of the anti-racist campaign leading up to the election was a big "dance for love" party right after the big extreme-right public meeting, in the same square in central Stockholm. The music was, entertainingly, eighties boogie, lots of D-Train and stuff. :) Only lasted an hour, unfortunately, I would have kept going all night.