Last year's tube party in protest against the drinking ban on the London Underground resulted in a court case last week in which a man was acquitted of assault after being beaten up by police at Liverpool Street Station. The following story comes from The Sunday Mirror (9 August 2009): 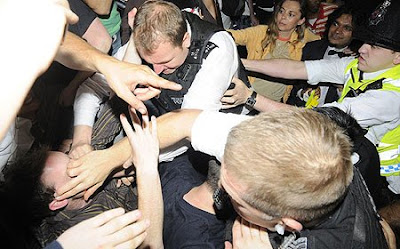 These shocking pictures show a man cowering in fear after being punched by a police officer.
A PC lunges at Chris Leonard and grabs him by the neck as police try to clear a train station packed with party-goers. A PC lunges at Chris Leonard and grabs him by the neck as police try to clear a train station packed with party-goers.
Astonishingly it was Chris – who claims he was punched in the face up to four times and got two suspected cracked ribs when the officer threw him to the floor and knelt on him – who was charged with assault. This week the case was thrown out of court after prosecutors reviewed a police video and Press pictures of the incident. Chris, 26, is now preparing to sue the police over the assault and for malicious prosecution and false imprisonment.
And he is planning to go to the Independent Police Complaints Commission about PC James Hendrick – the officer he claims assaulted him at Liverpool Street station in May last year.
PC Hendrick is in the Met’s Territorial Support Group. Other members of the same squad were linked to the death of bystander Ian Tomlinson during the G20 protests in London this April.
Chris, a land surveyor with no criminal record, was one of around 1,500 revellers packing the station. The Last Orders On The Tube events were held the night before a ban on drinking on public transport came into force.
Chris says: “It was a really good atmosphere. There were loads of people drinking and dancing. I maybe had about four or five beers, but I wasn’t drunk.” At around 11pm, senior officers decided to clear the station and around 50 PCs formed a line across the concourse. Police digital camera footage shows them coming forward in an effort to move the crowd towards the exit. In the footage, Chris can be seen smiling and talking to some of the officers.
He says: “I did join in with some of the others giving the police some banter but - we were asking why they were pushing us back.” He adds: “At first, it was all good-natured. But as we got closer to the escalators near the exit there was less room to move and people were starting to get a bit crushed and panicked. The police shouted at us to get back and people shouted that we couldn’t move any more. I thought they were being heavy-handed. I was getting quite scared because I realised I was trapped and I felt like there was no way out. I also realised people behind me in the crowd were throwing things at the police – I saw beer cans flying over my head.”
Moments before he confronted Chris, the police film shows PC Hendrick being hit in the face by what appears to be a can of beer. He turns and briefly puts his hand to his face and seem agitated before he rejoins his colleagues in the advancing police line – some of whom have their batons drawn.
Chris says: “I only noticed him seconds before he hit me. I just had time to realise, ‘Oh god, he’s coming for me.’ I backed away as far as I could, but I couldn’t get away from him. I remember saying, ‘What the hell are you doing?’ as I saw him draw his fist back. He hit me three or four times in the mouth and nose in quick succession. I was left disorientated but could hear people around me shouting and screaming at him.”
Pictures taken by Press photographers appear to show PC Hendrick lunge at Chris’s nose and grab his neck as blood drips from his mouth
Posted by Transpontine at 6:00 am

Fascinating stuff, as ever. Cheers