Derek Jarman and the colour of noise 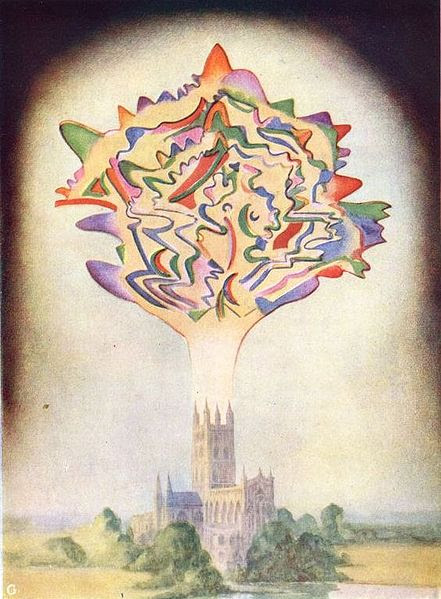 I’ve been reading Chroma, by Derek Jarman (1994), I believe the last of his books published during his lifetime. It's a meditation on colour, all the more poignant as he was going blind at the time. At several points he talks about the colour of music:

- ‘the painter Kandinsky who heard music in colours said: "Absolute green is represented by the placid middle notes of a violin"’
- ‘It was on a tortoiseshell lyre that Apollo played the first note. A brown note. From the trees came the polished woods to make the violin and bass, which smuggled up to the golden brass. In the arms of yellow, brown is at home’
- ‘You set the colours against each other and they sing. Not as a choir but as soloists. What is the colour of the music of the spheres but the echo of the Big Bang on the spectrum, repeating itself like a round’.

This an ancient theme, going back at least as far as Pythagoras and various occult cosmologies linking musical notes, colours and heavenly bodies in a cosmic harmony. I particularly like the colour thought forms of Annie Besant and Charles Leadbeater, where they attempted to show the colour forms they believed were left by different kinds of music, the music of Gounod hanging over a church for instance. More recently there have been attempts to scientifically ascribe colours to sound, based on analysis of the frequency spectrum to identify pink noise, blue noise and so on.

Has anyone tried applying some of these ideas to current music? What does a dubstep thought-form look like hanging above a club in South London? What colour is grime?
Posted by Transpontine at 10:05 pm

Email ThisBlogThis!Share to TwitterShare to FacebookShare to Pinterest
Labels: religion/spirituality