Do they owe us a living?

Occasionally I pick up my mandolin (yes really) and sing. Earlier this year at the (now evicted) Camberwell Squat Centre, I played a few songs at a gig with PJ and Gaby and I Made This Mistake. I performed a version of Crass's Do they owe us a living , and even though I'd added a melody that isn't on the original song everyone was singing along by the time I'd got to the second chorus. 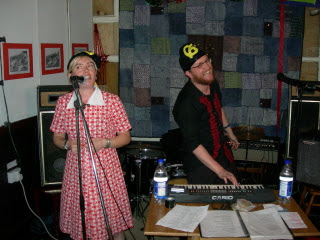 I thought I was being quite innovative, but not long after at the same venue I went to see Kleber Klaux, an Australian synth duo who did a version of the same song (pictured at this gig). Talking to them afterwards they mentioned that they'd played another gig where some people did an electro version of it. Then I came across another electronic version from San Franciso by The Soft Pink Truth. Finally, for now, I hear that Jeff Lewis, from New York, has recorded a whole album of Crass covers including Do they owe us a living?

I think we can say that this song is not only an anarcho-punk standard, but is on the way to becoming probably the only true anarcho-punk folk song, that is a song that is now known by many people who have never heard the original (recorded on 1978's Feeding of the 5000).
What I like about it is simply the sentiment of the title 'Do they owe us a living? Of course they do'. Some of the other lyrics I have always felt more ambivalent about. When I sang it, I must admit I changed 'Don't take any notice of what the public think,They're so hyped up with T.V., they just don't want to think' to 'we're so hyped up...', trying to defuse the holier than thou tone that was one of the weaknesses of anarcho-punk moralism.
Interesting interview at 3 am magazine with George Berger, author of book about Crass;
Expletive Undeleted also has a couple of good Crass posts; Green Galloway has loads.
Posted by Transpontine at 10:13 pm