More on Situationists and Factory Records

Further to previous post about Tony Wilson and Situationists, I've come across the following statement from Wilson made at the Hacienda in 1995:

"I was at Cambridge with other would-be Situationists like Paul Sieveking and I was a member of the Kim Philby Dining Club which I think had some people from the Angry Brigade involved. We all wanted to to destroy the system but didn't know how. We knew about Strasbourg and the Situationist tactics of creative plagiarism and basing change on desire. The Situationists offered, I thought then and I still think now, the only future revolution I could imagine or want" (quoted in Andrew Hussey, The Game of War: The Life and Death of Guy Debord, 2001).
The Kim Philby Dining Club did indeed include among its members John Barker and Jim Greenfield, later jailed for their part in the Angry Brigade bombing campaign of the early 1970s. According to Gordon Carr in his book 'The Angry Brigade' (1975) the Club was named after the ex-Cambridge Russian spy in around 1968 'by a group of Cambridge Situationists in honour of the man they regarded as having done more than any other in recent times to undermine and embarrass the Establishment'. 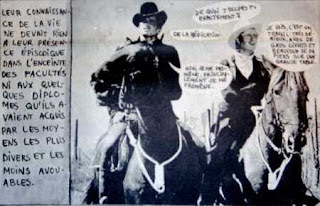 Also came across On The Passage Of A Few Persons Through A Rather Brief Period Of Time by John McCready, another article specifically on the SI and Factory Records. He uncovers some other connections, reminding us that it was actually Rob Gretton (among other things New Order's manager) who came up with the Hacienda as a name for the Factory nightclub in Manchester, inspired by reading a copy of Christopher Gray's Leaving the Twentieth Century - a collection of Situationist International texts given to him by Tony Wilson. He also notes that there was a Kim Philby bar in the Hacienda, that A Certain Ratio name checked a Situ/Surrealist hero on 'Do The Du(casse)' and gets Peter Saville (designer of iconic Factory sleeves) enthusing about the 'two cowboys' image in the situationist 'Return of the Durutti Column' comic strip.
See also Owen Hatherley and Sonic Truth on Wilson.
Posted by Transpontine at 6:30 pm

I find it bizarre every time I read references to the Kim Philby Dining Club. The KPDC was a weekly bread and cheese lunch held by the Cambridge University Socialist Society. It had no membership, although the SocSoc did. Anyone could turn up and pay their money to have some food. Lots of University societies did similar things. Although some of us read and were influenced by situationist texts, most of those there were Trots of one shade or another. It was a place for exchange of information (networking as it is called these days). The Socialist Society was essentially a broad left organisation in the late 60s. Meetings embraced anarchists, unaligned lefties, socialists and communists of various flavours. Most factions would have their own separate closed meetings where they brandished their party cards (perhaps - mostly they let anyone come if they had a speaker). Oddly, no-one tried to take over the broad organisation, but shouted at each other and debated in relatively jocular fashion. I don't know who thought up the name of the Philby Club. It was clearly intended to be provocative of the right (I think it was covered in the Telegraph) but I doubt anyone had much time for Philby, even the few tankies that drifted along.