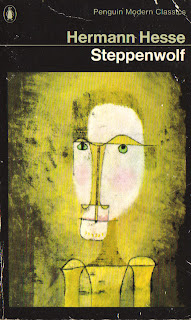 Herman Hesse's novel Steppenwolf, first published in 1928, is an outsider novel whose protagonist, disgusted by German militarism and bourgeois complacency, retreats into self-loathing and isolation like a lone wolf of the Steppes. That is until a series of encounters lead him into a world of bisexual flirtation, sex, drugs, jazz, dancing, 'Anarchist Evening Entertainment' and ultimately a fantasy Magic Theatre where he must come to terms with the illusion of the self.

The book has had an influence on music- its title gave a name to the rock band who recorded 'Born to be Wild', while one of its phrases, 'For Madmen Only', was used by proto-goth band UK Decay for the name of their first album.

For me though the most interesting aspect is its description of dancing. I used to wonder if that euphoric sense of dance as festival was a product of late 20th century electronic music and MDMA, but Hesse describes similar sensations in the 192os in his imagined Fancy Dress Ball where they danced the foxtrot to unamplified sound. Check this out:

'Every part of the great building was given over to the festivities. There was dancing in every room and in the basement as well. Corridors and stairs were filled to overflowing with masks and dancing and music and laughter and tumult… the whole building, reverberating everywhere with the sound of dancing, and the whole intoxicated crowd of masks, became by degrees a wild dream of paradise… the intoxica­tion of a general festivity, the mysterious merging of the personality in the mass, the mystic union of joy... I myself swam in this deep and childlike happiness of a fairy­ tale. I myself breathed the sweet intoxication of a com­mon dream and of music and rhythm and wine and carnal lust…I was myself no longer. My personality was dissolved in the intoxica­tion of the festivity like salt in water. I danced with this woman or that, but it was not only the one I had in my arms and whose hair brushed my face that belonged to me. All the other women who were dancing in the same room and the same dance and to the same music, and whose radiant faces floated past me like fantastic flowers, belonged to me, and I to them. All of us had a part in one another. And the men too. I was with them also. They, too, were no strangers to me. Their smile was mine, and mine their wooing and their's mine.
I had lost the sense of time, and I don't know how many hours or moments the intoxication of happiness lasted…There were no thoughts left. I was lost in the maze and whirl of the dance. Scents and tones and sighs and words stirred me. I was greeted and kindled by strange eyes, encircled by strange faces, borne hither and thither in time to the music as though by a wave... And now a feeling that it was morning fell upon us all. We saw the ashen light behind the curtains. It warned us of pleasure’s approaching end and gave us symptoms of the weariness to come. Blindly, with bursts of laughter, we flung ourselves desperately into the dance once more, into the music, and the light began to flood the room. Our feet moved in time to the music as though we were possessed, every couple touching, and once more we felt the great wave of bliss break over us'.
Posted by Transpontine at 10:26 pm