Lots of interesting music-related activity going on at Tate Modern in London as part of its Long Weekend. Throbbing Gristle were playing last night in memory of Derek Jarman, performing while showing some of his Super-8 films. There have also been showings of Andy Warhol and Maya Deren films with accompanying musical performances from the likes of Michael Nyman and Ikue Mori.

I went along yesterday afternoon to check out the Turbine Hall where French artist Mathieu Briand had created a sound installation: SYS*011. Mie>AbE/SoS\ SYS*010, also known as the Spiral. Among other things this included five decks and a vinyl-cut machine, while around the gallery a crowd of people in masks wandered around, choreographed by Prue Lang. 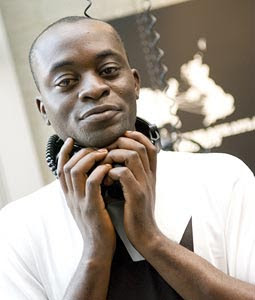 I was most interested in the musical performances. I managed to catch Charlie Dark (of Blacktronica and 'broken beat' fame, pictured) who did a great track built up around some dub poetry (was it from Linton Kwesi Johnson's Five Nights of Bleeding?). The Bug, with Spaceape, dropped a bit of The Specials while Radio Active Man (Keith Tenniswood of Two Lone Swordsmen) played a set of techno and breaks. In the cavernous Turbine Hall it all sounded like a warehouse party, the music setting of various vibrations around the space. All that was missing were people really dancing. Lots of people, sitting and standing, were nodding heads, tapping feet, swaying around and some people (me included) were dancing a bit but in a hesitant, restrained kind of way. It was if the conventions of the gallery and maybe time of day were holding people back, but it felt like there was a tension waiting to snap, as if a few people jumping on a podium and really letting go would trigger an explosion of movement. But I wasn't going to put myself out there as the detonator!

Posted by Transpontine at 7:55 am