Raid on 'Homosexuals and Satanists' in Iran

'Iran's revolutionary guards have announced the arrest of "a network of homosexuals and satanists" in the western city of Kermanshah, close to the country's border with Iraq, prompting fresh alarm over the treatment of gay people in the Islamic republic. The news website of the revolutionary guards in Kermanshah province, home to the country's Kurd ethnic minority, reported on Thursday that their elite forces had dismantled what it claimed to be a network of homosexuals and devil-worshippers.

A number of foreign nationals, including Iraqis, were also among those detained, the report said, adding that eight of the group were married to each other. The group were picked up from one of the city's ceremony halls, which they had rented for a birthday party. The guards' webiste said they were dancing as the raid ensued. The revolutionary guards claimed the group had been under surveillance for some time but did not specify how many people were arrested'.

The Iranian Lesbian & Transgender Network has since reported (16 October) that  'Dozens of people recently arrested in Kermanshah, Iran have all been reportedly released on bail'. In a country with various paramilitary/police agencies the Network suggests that it is significant that the Revolutionary Guard (IRGC) themselves carried out the raid, the 'first time the IRGC has openly declared responsibility for confronting a community described as belonging to “homosexuals” and “satanists”. In the past, police and Basij forces were reportedly the forces responsible for raiding house parties and assaulting, harassing, and arresting guests for same-sex relations or 'Actions against chastity'. 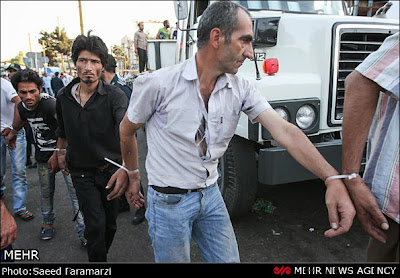 The International Campaign for Human Rights in Iran has published more detail, drawing on an eye witness account:

“There were 75 guests in the party. A banquette hall had been rented therefore the owner had given permission to an all-men party to take place there...“about 60 to 70 IRGC and Basij forces entered the hall, around 12:15 am., after dinner was served. The agents had Kalashnikovs, pepper sprays, cables and Tasers. They started beating everyone, using swear words:’You’re not men, you’re a bunch of women. You’ve gathered here to rape each other. The government will never accept you. Faggot asses! (Korreh-khar’ha’ye Hamjensbaz)”

"The men were beaten harshly. Their cellphones and cameras were confiscated. When a young man refused to give up his cellphone, the agents attacked him and beat him mercilessly. A total of 17 Guests who wore colorful clothes or looked like Ahl-e-Haq [members of this group have distinct-looking mustaches] were taken to the local police station. The rest of the guests were kept in the hall, and they were forced to eat the cake and they were insulted while they were forced to eat the cake. After that, the remaining guests were forced to sign a pledge (they weren’t allowed to read the content), and were released.”

“Seventeen of the men who were singled out based on their appearances and religious beliefs were transferred to a police station and then shortly thereafter were taken to an unknown detention center. They were blindfolded at all times. They were stripped down to their briefs/underwear. They were photographed naked from several angles. Then they were given prison grey-suites, a uniform for those who’re going to be hanged. The detainees’ clothes and other belongings were placed in bags plastic bags. They were interrogated repeatedly. At the detention center, the men were taken to a very small space, a little larger than a phone booth, blindfolded, and they were asked to pull up their blindfold a little. The place was ‘very, very dark.’ They were repeatedly beaten and accused of being homosexuals and Satan-worshippers'.

Accounts in the Western press have mainly focused on the obvious anti-gay aspects of this raid, but it is also linked to the attacks on other cultural and religious minorities in this Kurdish area of Iran. Suspected 'Ahl-e-Haq' ('People of Truth') were seemingly singled out during the raid, followers of the Yarsan religion. This weekend 80 people protesting against the persecution of this faith were arrested in Tehran.

Posted by Transpontine at 10:41 pm