The 13th issue of Datacide, the international magazine for noise and politics, is out this week. As well as a conference and release party in Berlin this weekend, there will be a launch event on Sunday 20th October 2013 in London, 7 pm to 10 pm. The event will take place at Vinyl (4 Tanners Hill, SE8) the new record shop/cafe/gallery in Deptford. It will feature talks from Datacide contributors, including me looking back on the movement against the 'anti-rave' Criminal Justice Act, and Christoph Fringeli on Datacide magazine. Further details to be announced.

Sunday nights sounds courtesy of DJ Controlled Weirdness, and there will be a bar. 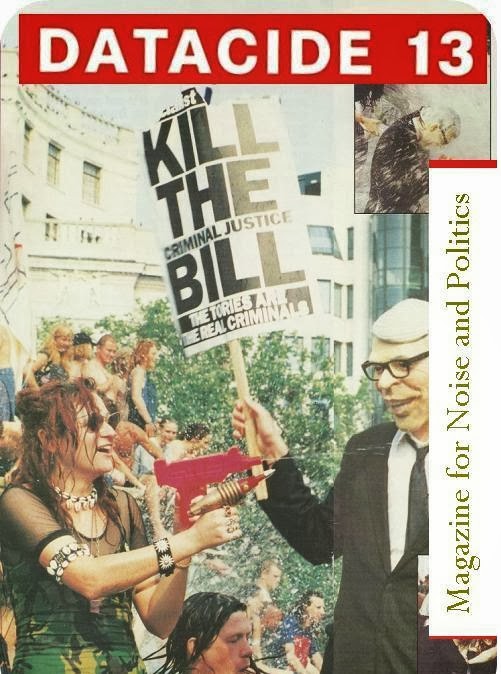 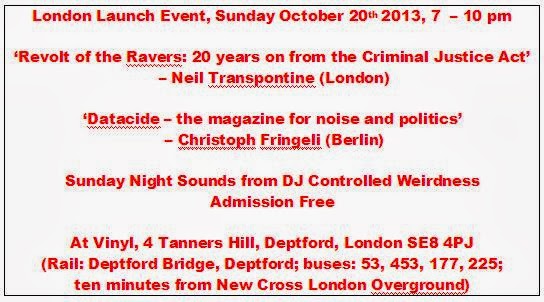 Update: now confirmed that event will include talk from David Cecil:

- 'Confessions of an Accidental Activist – Sexual politics and homophobia in Uganda'. David was arrested in Uganda and deported earlier this year. He found himself in the media spotlight after he produced a comedy drama in Kampala (Uganda) which was mistakenly portrayed as a piece of ‘gay activism’. The US evangelist movement, international rights activists and the mainstream media have all contributed in different ways to misleading perceptions of sexuality in Uganda. Meanwhile, more substantial and complex factors of post-colonial socio-economic transformation have been (deliberately?) overlooked, along with the actual experience of daily life for LGBTI people in Uganda. 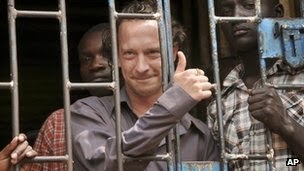