Getting totally addicted to Like Punk Never Happened: Brian McCluskey's Smash Hits Archive. Whole issues of the late 1970s/early 1980s UK pop magazine scanned in for you to browse at your leisure. So much stuff in there: photos, lyrics, gig listings, charts. Just the disco chart alone will keep me going for months.

So here's the disco chart from September 20 1979 (click to enlarge), complete with BPM for all you DJs. Looking at it they seemed to define disco rather broadly - reggae gets a look in with Matumbi and Eddie Grant. Could call it a black music chart, though Ian Dury and Roxy Music also feature. Guess it's all music that might be played in a disco, which is fair enough. Anyway The Crusaders' Street Life was number one, with Sister Sledge, Donna Summer, Earth, Wind & Fire and Rose Royce all present and correct, among others. 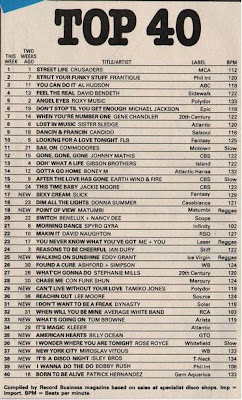 Have a dig around in Smash Hits and let me know what you find - there's treasure in there of all kinds (post-punk, disco, reggae, pop...)
Posted by Transpontine at 9:35 pm