History is Made at Night in Berlin: Datacide Launch Party

Going to be in Berlin next week to do a talk as part of the launch of the new edition of Datacide magazine (number 11), in which I have an article. The next night there's a launch party. Details follow:

“333 bpm” - a sonic-fiction by Riccardo Balli
Iconographic references by: Caina
Every style in electronic music inspires a certain social behaviour, well more, it actually structures the listener’s brainframe. Do you want to know how? And, above all, do you want to smash this social brainframe down by hyper-mixing genres? Some tips on how to do this can maybe come from this fiction, a sonic one, of course!

Dance before the police come - talk by Neil Transpontine
What’s going on when police raid parties? Neil Transpontine explores the different ways laws on sex, drugs, noise, property and subversion are used to constrain dancing in the UK and across the world. 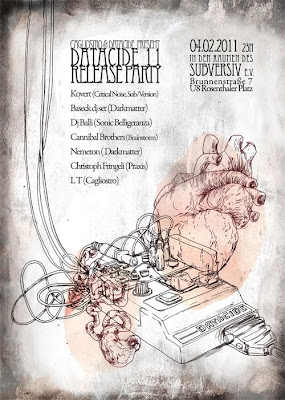 Posted by Transpontine at 8:21 pm