Terrible news (via BBC) of a nightclub fire in Russia last night:

'At least 101 people have died following an explosion at a nightclub in the Russian city of Perm, 1,400km (870 miles) east of Moscow. Officials said fireworks caused the blast and that most victims had died from smoke inhalation. More than 140 people were reported injured in the accident, which happened at 2315 local time (1815 GMT). The Lame Horse nightclub had been celebrating its eighth anniversary, emergency services said'.

The photo below, from the BBC website, shows people in their party clothes laid out dead on the pavement. 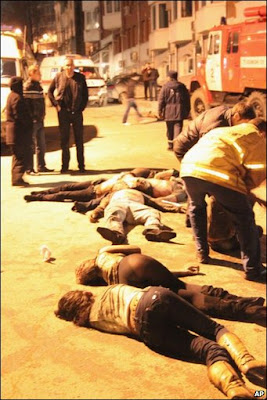 Posted by Transpontine at 11:44 am