Ma Jian's Beijing Coma (2008) is a fictionalised account of the events leading up to the 1989 Tiananmen Square massacre in China, and its aftermath. The novelist travelled from Hong Kong to visit the Square and support the movement at the time, and his rendering of the story is undoubtedly on the side of the protestors.

It is not a particularly uplifting book. The description of the massacre itself - and indeed of earlier atrocities in the Cultural Revolution period - is, as you might expect, very harrowing. But there is also an honest treatment of divisions with the protest movement. The narrator's judgement is presumably also the author's: 'When the guns were pointing at our heads, we were still wasting time squabbling among ourselves. We were courageous but inexperienced, and had little understanding of Chinese history'.

Although the Square where the demonstrators camped out was ultimately to be a killing zone, there is also a sense that within it a zone of freedom was temporarily created where thousands of (mainly) young people were able to escape the rigid controls of living in a police state: 'Tiananmen Square was the heart of our nation, a vast open space where millions of tiny cells could gather together and forget themselves and, more importantly, forget the thick, oppressive walls that enclosed them'.

The author describes moments of festivity - in a sense Tiananmen Square was that generation's Woodstock as well as its Wounded Knee: 'The Square was blanketed in dawn fog. Everything was quiet. The nights were much livelier. Boys would sit back to back drinking beer. Couples would huddle in quiet corners humming love songs to one another, then sneak off into empty tents to make love. It was like a huge party'.

When the Goddess of Democracy statue was raised in the square 'Students from the Academy of Music stood up and sang 'The Blood-stained spirit' and Beethoven's 'Ode to Joy'. Barechested boys from the Dance Academy performed a Shaanxi Province folk dance, beating drums tied to their waist'. In another episode, two characters get married in the Square: 'Someone put a tape in the cassette player and told the newly-wed couple to dance....The crowd of children and adults began to dance too. The air and sunlight seemed to move to the rhythm. As the crowd spread out, the paved terrace began to shake. 'This is the season of love... You can smell the love in the air, Everyone needs to fall in love....' Soon everyone on the Square was dancing. Tens of thousands of people were singing, clapping and stamping their feet. The Goddess of Democracy's upheld arms looking like a flock of white doves soaring into the blue sky' 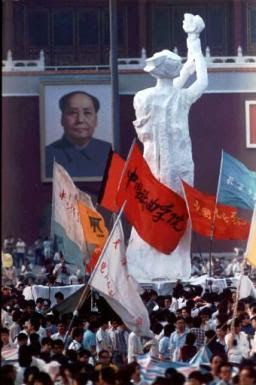 Another feature of the movement was that protestors continued to sing socialist songs, in particular the Internationale. As the soldiers gathered to crush the protest. 'The broadcast station played a tape of the Internationale. The sound was louder and cracklier than usual. Everyone in the square sang along. The announcements blaring from the government speakers on the lamp posts had become louder too, and the echoes added to the din'. The author is aware of the contradictions of this: 'The national anthem blared out again from the loudspeakers on the Monument. 'Arise, ye who refuse to be slaves! With our flesh and blood, let us build a new Great Wall'. As we sang along, we began to relax a little. It occurred to me that most of the people who'd been shot by the Party since 1949 had shouted 'Long live the Communist Party!' when the bullets were fired. I wondered whether I, too, was going to die singing the national anthem beneath the national flag'.

This caused me to reflect too - to what extent can the language and symbols of the 19th and 20th century socialist movement still be used by those who aspire to a better world? Can the red flag, the Internationale, the hammer and sickle be reclaimed or have they been tarnished beyond repair by the butchers of China, Cambodia and the USSR? I am not sure.
Posted by Transpontine at 6:00 am

Because they weren't really socialist etc but rather state capitalist: instead of having many corporations you had just the one.

I completely agree that China, Cambodia and the USSR were never communist, and were indeed capitalist (e.g. most people were still wage labourers working for the boss, in this case a very big boss who shot people when they went on strike). My point is rather whether the specific iconography of the 20th century left can still be used for a forward-looking radical movement. Whether or not we think these regimes were socialist, they have (mis)used the symbols of the early labour movement so extensively that to many people these symbols stand for despotism and misery rather than liberation. Maybe some songs and imagery can be salvaged, others perhaps have been too corrupted to be used with a straight face.