Homage (from a beach) in Catalonia

I'm not going to claim that I got any great insights into the local musical/political/social milieus whilst lazing round in the sun in Catalonia recently. The closest I got to radical politics - other than reading Planet of Slums by Mike Davis on the beach - was buying an Accio Antifeixista(anti-fascist action) t-shirt from Partisano, a militant ska punk emporium in Girona. 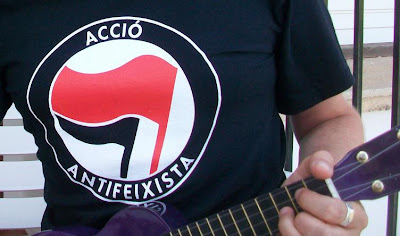 As for music, well let's just say that all I learned was that Swedish indie pop band I'm from Barcelona have reached the dizzy heights of having their epynomous theme song used in a TV advert for San Miguel lager.

Still I did come across some interesting stuff in Colm Toibin's book Homage to Barcelona (2002) about how the politics of war, revolution and dictatorship were played out musically in the 2Oth century.
The fascists in Spain sought not only to crush worker insurgency but to impose one unified Spanish state with one language (Castillian Spanish) and one Catholic culture. Under the 1920s military dictatorship of Primo de Rivera, not only the anarchist CNT union was banned but also the Orfeo Catala, the main Catalan language choir (there was a strong choral tradition among factory workers with 85 workers choirs in Catalonia by 1861). For a while Barcelona FC matches were stopped after the crowd booed the Spanish national anthem. 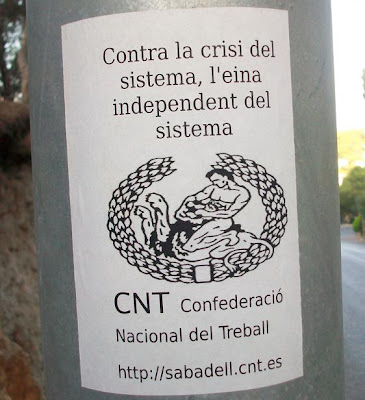 Under Franco the Catalan anthem Els Segadors was banned along with the public use of the language and Sardanes, a popular Catalan circle dance. During the dying days of the dictatorship these elements became expressions of resistance, including songs from La Nova Canca folk movement. Lluis Llach's 'song L'Estaca became the battle hymn of Catalonia in the last years of the old regime. It was about a stake in the ground, and how if youi beat at it for long enough it would fall. The chorus repeated the word fall, and everybody who sang the sing wanted it to fall, fall, fall. On Sunday nights in the mid-1970s the sardana would be danced in the Placa de Saint Jaume, and afterwards they would join hands in the square and sing "L'Estaca". Sometimes the police would come in jeeps and attack people, but most of the time it was quiet and orderly, there was just the fervour of the chorus "Segur que tomba, tomba, tomba"' (Toibin). 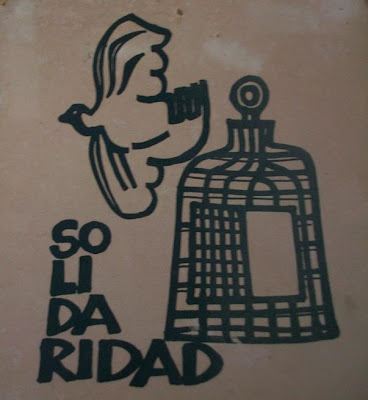 Toibin also notes how a new political elite was waiting in the wings to take over from Franco. Interestingly, in view of earlier discussions at this site about dancing and class formation, he identifies a Barcelona nightclub situated by Santa Maria del Mar as the key location for the emergence of this elite.
Zeleste was set up in a former clothes shop in 1973 by Victor Jou to offer 'a venue to more marginal and left wing groups, to jazz bands, and to people who wanted something new and different' in a city whose nightlife was dominated by flamenco bars; 'Twice during the early years of Zeleste the police came in vans and arrested the entire bar - all three hundred clients - and took them in for interrogation'.
Increasingly, the club became where 'the new ruling class, the men and women who later came to run the city, used to meet in the years before they took power. Zeleste was the place where the young designers and architects, painters and writers, politicians and journalists had discussed matters of mutual importance late at night in the last years of the dictatorship'.
In the 1980s it was replaced by Zeleste Nou, a 2500 capacity converted warehouse with a dancefloor downstairs and passageways along the roof for those needing some fresh air. By this time some of Zeleste's former denizens, the Socialist politicians who now ran Barcelona, were working hand in glove with ex-Francoists like Juan Antonio Samaranch to plan for the 1992 Olympics. The latter had gone from running Barcelona under Franco to becoming President of the International Olympic Committee. 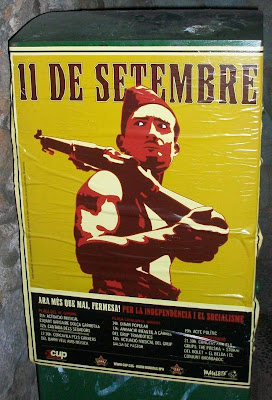 Poster in Girona last week promoting musical and other events 'per la Independencia i el Socialisme'
Posted by Transpontine at 11:04 am

What about Raimon? Have you come across him?

"In 1958, a 17 year old working class lad from Xativa, an industrial town in the provence of Alicante wrote an apparently conventional teenage song about riding pilion on a motorbike. He was called Raimon and the song was called Al Vent - In The Wind - 'Face in the wind, heart in the wind, hands in the wind, the wind of the world'.

And thence this song became taken up by those who desired to resist the fascist regime with amazing consequences...