Great to see this Free Pussy Riot banner at tonight's football match between Manchester City and CSKA Moscow. It may have been swiftly removed by stewards, but the image of it is already going round the world.

This week's the family of Nadya Tolokonnikova  complained that she has been 'disappeared' in the prison system. According to the Independent (2 November 2013):

'A Pussy Riot member imprisoned at a Russian camp hasn't been heard from for 10 days, her family has said. Nadya Tolokonnikova was moved from her prison colony in the Russian republic of Mordovia on 21 October. She is currently serving two years for her band's performance of a crude song in a Moscow church in February 2012.She had been on hunger strike over conditions in the prison. 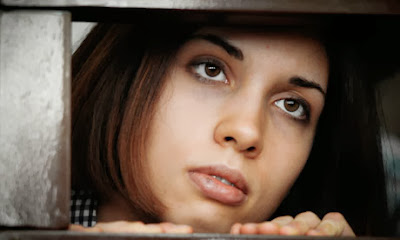 Her father, Andrei Tolokonnikov, told Buzzfeed: “No one knows anything. There’s no proof she’s alive, we don’t know the state of her health. Is she sick? Has she been beaten?” Her husband, Petya Verzilov, has been protesting outside the colony regularly. He said: “We think they moved her to a big city to hide her. It seems they got sick of these protests. They want to cut her off from the outside world. When they moved [political prisoner Mikhail] Khodorkovsky, he was also kind of absent for two weeks. Nobody knew where he was, then he suddenly appeared in Chita."

During the offending protest the all-female punk band ran into Moscow's biggest cathedral sang a song calling on the Virgin Mary to kick President Vladimir Putin out of office. Tolokonnikova and fellow member Maria Alyokhina are serving sentences for “hooliganism motivated by religious hatred” following the performance'.


Meanwhile 28 Greenpeace activists and 2 journalists remain in prison charged with hooliganism after a protest at a Russian offshore oil rig in the Arctic in September. These high profile cases are just the tip of the iceberg. Last month (27 October) thousands of people took part in a rally in Moscow in solidarity with political prisoners.
Posted by Transpontine at 10:43 pm