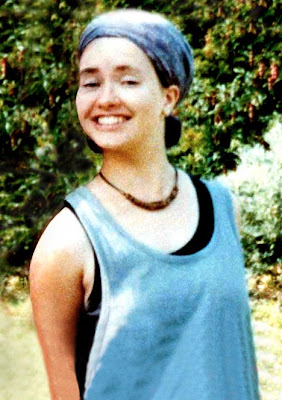 A man was convicted this week of the murder of 18 year old Dinah McNicol (pictured) in 1991. Peter Tobin is now known to have killed at least three young women, including Dinah whose body was found in his garden in Margate in 2007.
All three cases are equally tragic, but Dinah's particularly touched a chord because she was killed while hitchhiking back from the Torpedo Town Festival, held at Bramshott Common near Liphook in Hampshire from 7th–9th August 1991. This free festival on Ministry of Defence land, with Spiral Tribe and Sweat sound systems, attracted some 12,000 people and is fondly remembered by many who were there. For some it was life changing in a postive way, as Steve Spiral describes:
'We pulled onsite and I was blown away, as I said I had been to quite a few of the big 89 parties like Energy but this was totally different, Crustys in knackered trucks mixed with ravers in flash cars and the vibe was amazing. I remember... the Brainstrom cafe which was an old 51 seater coach parked up on the edge of the area that was space set aside for the rave, which I think was owned by Rob who later became know for Universe and Club UK. There was an old generator that was revving so high that it was billowing out black smoke this was because it was not powerful enough to run all of the equipment plugged in to it. As all of my mates were good friend with the whole Spiral crew I was introduced to the lot of them as their mad friend who had come back from Tenerife for a few days, they were all so down to earth not like Rave promoters egotistical and full of them selves but just normal people who wanted to party for the fun of it and not for the money and recognition. This party changed my life and my perception of what a party should be, no police, no security being moody, and great people who just wanted to get on one and have fun, and all for free. I didn't want to go home, I had found my calling. I did go home though and explained to my folks that I had decided not to go back to Tenerife'. 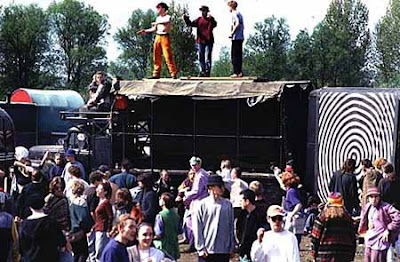 So sad that for Dinah this was to be her last weekend. Though you can only hope she had a good time, that is little compensation for her friends and family.
See also: Tobin victim Dinah McNicol: Bright, kind lover of rave music (Guardian 16.12.09); picture of Torpedo Town 1991 from The Acid House.
Posted by Transpontine at 6:00 am