Reclaim the Streets: Bristol and Oxford 1997

A couple of reports from Mixmag magazine of Reclaim the Streets parties  in 1997-
'Police Seize Desert Storm Truck After Reclaim the Streets Party' (Mixmag. August 1997)
'A truck and equipment belonging to the Desert Storm sound system was seized and two of its occupants charged with conspiracy to cause a public nuisance after a Reclaim the Streets party in Bristol on June 21st. An exuberant-yet-peaceful march from Castle Park was followed by a four hour rave on a major dual carriageway with two sound system playing techno and jungle to between 400 (police estimate) and 1500 (RTS estimate) people...
...trouble flared when mounted officers and dog handlers dispersed the remaining crowd. In the ensuing scuffles, 22 people were arrested for public order offences, criminal damage and assault... The Desert Storm truck was seized the following day, and the sound system is currently planning a series of benefit parties to replace its loss'. 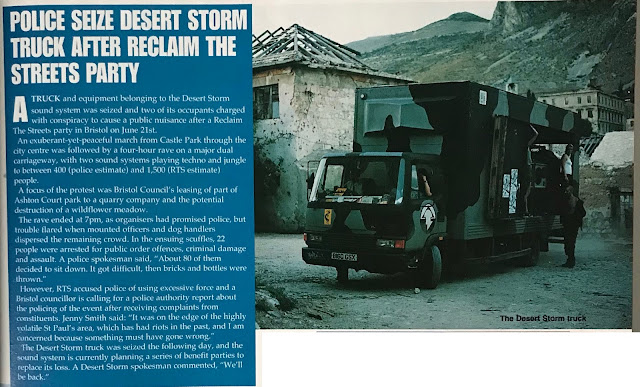 'Reclaim the Streets party strikes in Oxford' (Mixmag, January 1998)
'Police have failed to stop an Oxford Reclaim the Streets party despite ugly clashes... protestors outflanked police and occupied the busy Cowley Road area on November 1st [1997]. A series of clashes arose as police attempted to seize a van containing the KSN sound system, but eventually police had to admit defeat and let the party continue. A five mile exclusion zone had been declared under 1994's Criminal Justice Act. Inspector David Whittaker said that his original intention had been to "prevent an obstruction of the road" but they had "obviously failed". According to RTS estimates, more than 1,000 people danced at the peak of the party. Three men were arrested for possession of cannabis... In Sydney, Australia, police adopted a more laidback approach as Enmore Road was blocked - and between 2,000 and 3,000 enjoyed a trouble-free day' 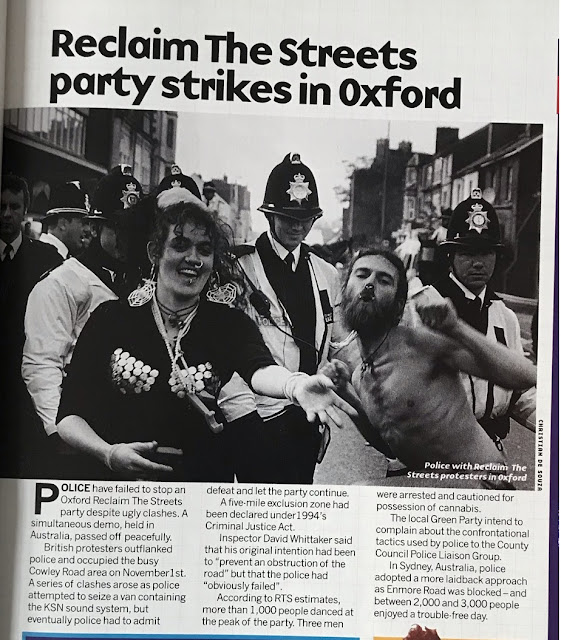 Posted by Transpontine at 5:37 pm