The summer of 1995, off to Ibiza. We bought the cassette of Café Del Mar Volumen Dos and cracked it open at the airport to get in the mood, listening on one headphone each on a walkman. A balearic selection of mellow, down tempo tunes from José Padilla, long time resident DJ at said Café. 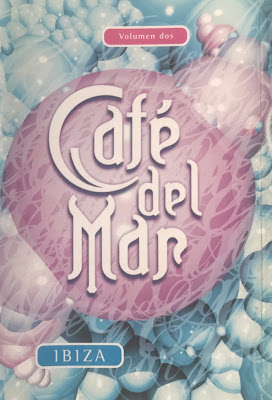 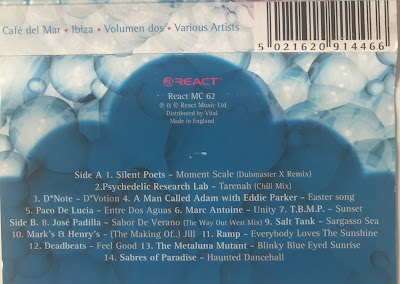 In Ibiza like everybody else we headed to 'the Caf' for a drink. The sun went down, but behind a cloud, so no glorious San Antonio sunset.  And they were just playing the Café Del Mar CD on rotation!  The Cafe experience was now pre-packaged and for sale and no doubt everybody was saying you should have been there the year before or the year before that.... Well  anyway by that point the tunes were well and truly lodged in our brains, and have never left. That particular night we moved along the sea front to Cafe Mambo which was much more lively, including Jeremy Healy walking around in a short gold skirt.

Fast forward a year and our daughter is born in a birthing pool in the front room, that same Café Del Mar cassette playing during labour. In fact at the moment of birth the compilation has reached 'Easter Song' by A Man Called Adam, a suitably uplifting spiritual moment with its repeated 'you're bringing me back to life' refrain. A few years down the line we see A Man Called Adam playing at an outdoor gig on the South Bank, we chat to singer Sally Rogers and she dedicates their Easter Song encore to our daughter who nevertheless declines invitation to join them on stage.

So farewell José Padilla, who died this week, thanks for helping to soundtrack these and so many other people's memories. 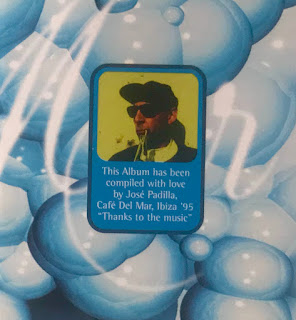 (all images from 1995 cassette artwork)
Posted by Transpontine at 1:12 pm

I've been going through all my Jose Padilla music to put together a tribute set and there's just so much of it!

Turns out that pretty much every sunset I have watched over the past 30+ years has had a least one song that Jose Padilla introduced to me. His music has always been in the background of pretty much whatever I have been doing. It's weird, because I would not have named him as one of my top DJ's (Gilles Peterson, Norman Jay, Dimitri From Paris, Phat Phil Cooper) but turns out I have pretty much every release he ever put out.

It feel so sad to think that there will be no more Jose Padilla compilations to look forward to.