Going on a recent march against the far right in central London got me thinking about my earliest forays into anti-fascism when I was at school...

In 1979 I was 16, in my last year at school in Luton and getting into radical politics off the back of a couple of years listening to punk. I was voraciously reading anything relevant I could get my hands on from local libraries and bookshops, which included that year Martin Walker's The National Front (dedicated to 'anti-fascists everywhere'), George Woodcock's The Anarchist Reader anthology and Gordon Carr's The Angry Brigade. The latter introduced me to the Situationists and I tried unsuccessfully to get Luton Central Library to find a copy of The Society of the Spectacle. The actual radicals on the ground in Luton were a bit more mundane than my fantasy 1968 utopians, basically the Communist Party, the Labour Party Young Socialists (including 'Militant') and the Socialist Workers Party selling papers in the town centre next to Don Miller's bakers.

The Clash were my favourite band, and I'd read all about the great Rock Against Racism carnivals of 1977/78 (in fact I wrote off to Rock Against Racism to enquire about getting involved). In the lead up to the  May 1979 General election, conflict between the far right National Front and its opponents increased in intensity. There were riotous clashes in Leicester and on the 23rd April 1979 socialist teacher Blair Peach was killed by the police in Southall while taking part in protests against an NF meeting in that predominately Asian area of West London.

The election, infamously won by Margaret Thatcher's Conservatives, nudged me towards participating in politics rather than just reading about it. I went to see Tony Benn speak in Luton town centre (29/4/1979), but I still hadn't been on an actual protest. All that changed in June 1979.

Someone I bought a paper off must have told me that the National Front were holding regular meetings at Luton Library with Anti-Nazi League pickets opposing them on the second Friday of every month. The NF had had a presence in the town for some time. In February 1977, NF Chairman John Tyndall was greeted with eggs and chants of  'nazi scum' when he arrived to speak at a meeting in Luton Town Hall (Luton News 10.2.77). The NF stood candidates in both Luton constituencies in the 1979 general election, with Donald How securing 701 votes in Luton West and MG Kerry 461 votes in Luton East. Notorious racist Robert Relf, who had once been jailed after putting a 'no coloureds' for sale sign outside his house in Leamington Spa, was working locally as a bus driver.

I approached my first protest on Friday 6th June 1979 nervously and excitedly expecting some kind of Leicester/Southall confrontation, if on a smaller scale. In the event it was all rather tame. There were about twenty of us picketing and a handful of suspected NFers sneaking in and out under the eye of a small number of police, a pattern that was repeated on subsequent similar protests over the summer.

The very next day though a group of us from Luton travelled up to Bedford town centre where a group of racist skinheads had been making a nuisance of themselves. As we gave out our leaflets in the name of 'People of Bedfordshire Against Racism' there was a a brief stand off with far right skins and anti-fascists squaring up to each other before the former moved off. Afterwards we went for a drink at a local gay pub, another first for me.

I heard a first account of the Southall events soon after, when I went to a Luton Anti Nazi League meeting with Balwinder Singh from Southall ANL. There were also speakers from Luton Trades Council (Jim Thakoordin) and the Pakistani Workers Association, and a collection for the Southall Defence Fund. 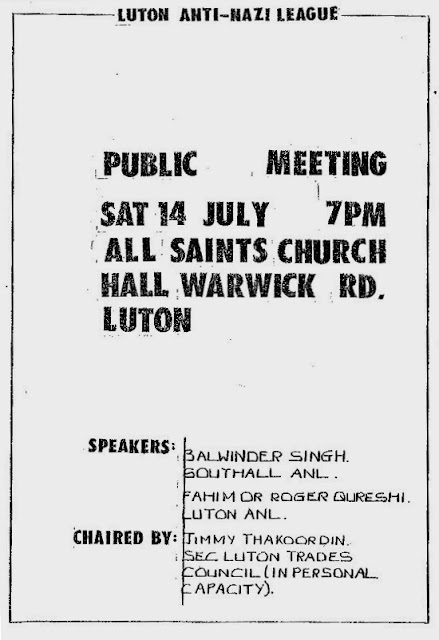 On my last day at school at the start of that summer I wrote in my diary 'bought a School Kids Against the Nazis badge, filled in a form to join the Labour Party Young Socialists, left school' (OK last day in school was a bit late to buy a school kids badge, but I did go on to Sixth Form College!).

﻿
﻿
It was another year before I went on my first major anti-fascist demo. In November 1980, the neo-nazi British Movement marched from London's Hyde Park to Edgware Road chanting 'We are the Whites' and 'Death to the Reds'. According to the report in The Leveller magazine, there were around 600 BM 'opposed by between 4 and 5,000 anti-fascists' who marched from Portobello Road in Notting Hill. Large numbers of police were mobilised - Socialist Challenge reported '8,000 cops defend 500 nazis' - turning Notting Hill into a 'sterile area'  to stop people getting near to the fascists. My main memory is  of standing around and of endless rumours about the whereabouts of the British Movement, who I never saw. There were 73 arrests, mostly in scuffles between anti-fascists, BM skins and the police Special Patrol Group near Paddington Station, with press photographers having their cameras taken by cops. Afterwards a Luton comrade, who was Jewish, took me to a Jewish Socialist Group meeting at a flat in north London.

So no great heroics, no Cable street or Lewisham-style battles... but maybe that was a good lesson. If you're in it for the long haul, you sure need to learn patience and low key local organising. On the counter-demo to the Tommy Robinson/UKIP 'Brexit Betrayal' march (December 2018). I actually saw somebody else who was also there on that first protest of mine in 1979. Of course it's more than annoying that the leading figure on the contemporary British far right also comes from Luton. But hey, Tommy Robinson doesn't represent us (as recently pointed out by Ash Sarkar he doesn't even represent 52% of mortgage fraudsters). We have Nadiya Hussain, Stacey Dooley and the mighty Luton Town FC, we certainly don't need him.

[I didn't stay in the Labour Party Young Socialists for much longer - that's another story - but 40 years later I've been on quite a few more demos! The following year  (1981) things hotted up further in Luton with the formation of an anti-racist Luton Youth Movement and a riot sparked by the presence of nazi skinheads in the town centre. I will come back to that another time].
See also: Blinded by the Light - memories of 1980s Luton racism and job cuts 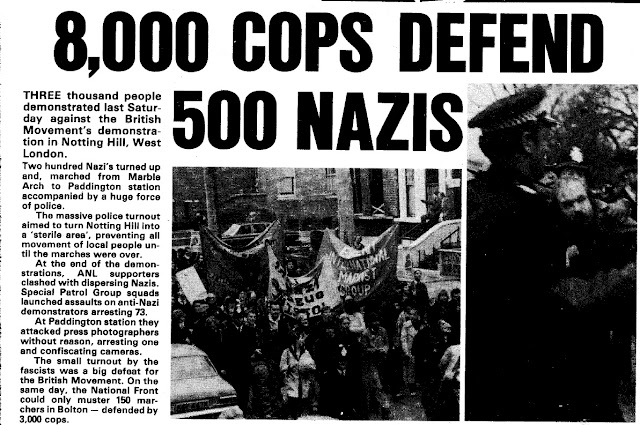