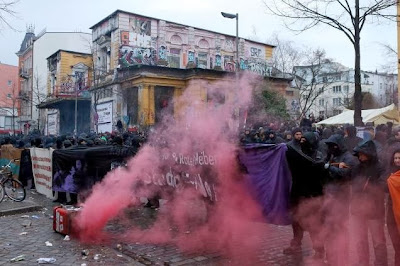 There were violent clashes in Hamburg yesterday over the threat to evict the Rote Flora social centre. The ex-theatre in the city's Schanzenviertel has been squatted since 1989, and serves as a a space for political and social  projects as well as gigs and parties. The local council sold the building to private developers some years ago, and they have recently announced plans to evict Rote Flora and develop a concert hall and office building. 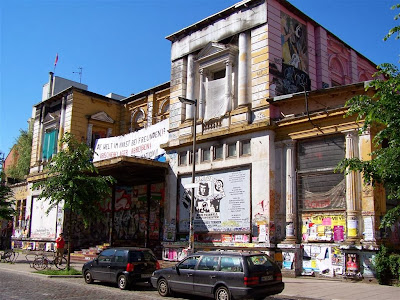 At least 7,000 people took to the streets of Hamburg yesterday, protesting against the planned evictions and also for the right for several hundred Lampedusa refugees to stay in the city. Demonstrators faced 2,000 riot police deploying water cannon, baton charges and pepper spray.

See Flora Bleibt ('Flora stays') for more information. Their English language call-out for yesterday's demonstration states: 'Worldwide, cities are places of political struggles which frequently refer to each other and connect. When people are demonstrating against gentrification, eviction and increasing rents in Istanbul, Athens, Barcelona, Frankfurt, Berlin, Amsterdam or Copenhagen, not only the issues and architectures of investors overlap but more and more the experiences of protest and political goals as well. Political movements are newly created and evolve from the cities' social basis. The fight for Rote Flora's preservation is intersecting with struggles of other squats and urban district projects worldwide. There is tenants' resistance against revaluation and displacement, protest against privatisation of urban life, self-organisation and sabotage against repression and the inhuman system of deportation and sealing off borders... Right to the City - Fight Capitalism! No Border - No Nation!' 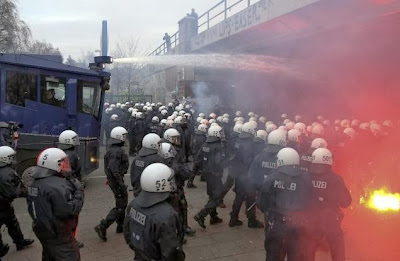 Posted by Transpontine at 12:38 pm