On  January 30th 1972, the British state killed 13 unarmed demonstrators on the streets of Derry (a 14th died as a result of their injuries a few months later). The dead, who included seven teenagers, were: 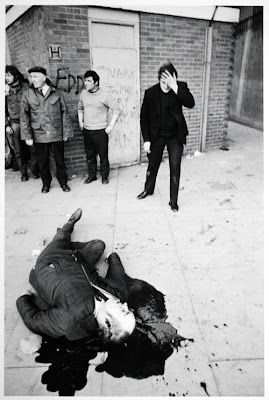 The Bloody Sunday massacre of 30 January 1972 came after four years of popular insurgency in the north of Ireland, sparked by the civil rights marches of 1968. The immediate lead up to the day was described in the text  'From Bloody Sunday to Trafalgar Square' which I had a hand in producing following the 1990 London poll tax riot:

"What became known as Bloody Sunday then has often been, and frequently still is believed to have been, an act of undisciplined slaughter perpetrated by blood-crazed Paras. This assumption though is wrong and to a large extent lets the British establishment off the hook. By assuming that soldiers "ran amok" it puts the blame on individual soldiers who pulled triggers and killed people. Bloody Sunday was a planned, calculated response to a demand for civil rights, designed to terrify organised protesters away from protesting. It fits easily into the catalogue of British involvement in Ireland as a quite logical and even natural event" (Fred Holroyd, ex-British Army Intelligence Officer.)

In August 1971 internment without trial was introduced. On the tenth, Operation Demetrius was launched. 342 people were arrested and nine people killed by troops. In this period experiments in sensory deprivation torture were carried out on some people arrested, with the aim of psychologically breaking them. With hoods placed over their heads, they were made to stand spread-eagled against a wall balanced on their fingertips. They were kept like this for four or five days, being bombarded with white noise and beaten if they moved, denied food, drink, sleep, or access to toilets. At intervals they were taken up in a helicopter and thrown out while just a few feet off the ground having been told that they were hundreds of feet up (they were still wearing their hoods).

In protest at internment, a rent and rates strike was organised which attracted the support of some 40,000 households. By October this had escalated to non-payment of TV, radio, car licences, road tax, ground rent, electricity, gas and hire purchase (this a good idea that we should imitate- after all why stop at not paying the poll tax?). In response to this crisis the Payments of Debt Act was passed, allowing debts to be deducted directly from benefits- no doubt our rulers remembered this idea when they dreamt up the poll tax. 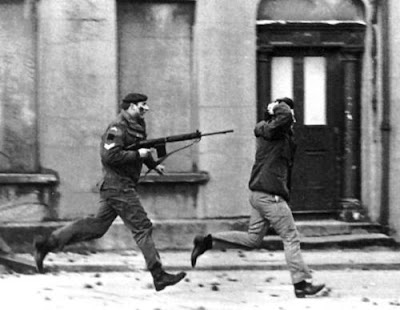 The introduction of internment was accompanied by a 12-month ban on all demonstrations. Despite this, on January 30 1972 tens of thousands of people attended a demonstration in Derry. The state's response to this act of defiance was a cold-blooded massacre. CS Gas and water cannon had already been used by the time the Parachute Regiment came onto the streets and opened fire on the crowd. The Army claimed that they were returning fire, but forensic tests on the 14 people killed showed that none of them had had contact with weapons and no weapons were found anywhere near the bodies'.

The official Bloody Sunday Inquiry eventually concluded in 2010 that the dead were innocent. But for years, the authorities attempted to hide the truth, with an earlier official investigation (the 1972 Lord Widgery report) including all kinds of smears and false claims that the soldiers had come under attack from gunfire and bombs. The fight for the truth was carried on for years by the victims' relatives and their supporters in the Bloody Sunday Justice Campaign.


﻿﻿For many years the main mobilisation of the Irish solidarity movement in Britain was for the annual Bloody Sunday commemoration march each January. I went on these marches in the 1990s, they typically attracted between two and five thousand people and ended up in a north London area with a high Irish population like Kilburn or Archway. 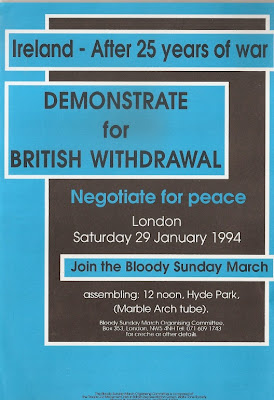 A feature of the Bloody Sunday marches was that the far right (BNP etc.) often mobilised to oppose them, so that in the pubs and streets surrounding the demonstrations there would be skirmishes between anti-fascists and racists. In 1990 for instance, three Anti Fascist Action (AFA) members were jailed after notorious Nazi skinhead Nicky Crane was dragged out of a taxi in Kilburn in the vicinity of the Bloody Sunday march.

The biggest trouble was on the Bloody Sunday march in 1993, when hundreds of fascists attempted to attack the march at the assembly point in Hyde Park and then again along Edgware Road. 376 fascists were arrested before the march made it to Kilburn where the speakers included Gerry Duddy, whose brother Jack was killed in 1972.


In Ireland, one of the biggest remembrance mobilisations was in Derry itself in 1992 on the 20th anniversary. I was there and wrote this report for the 56a Info Shop Bulletin (May 1992):

'My first real taste of the British military presence came when the bus bringing us from Blefast was stopped at an army checkpoint outside of Derry. Troops boarded the bus, with one soldier walking slowly up the bus pointing his rifle at the heads of passengers.  In Derry itself the 'security forces' were keepong a low profile (by Irish standards), presumably because of the large international press presence. A low profile involved three helicopters in the sky, armoured police land rovers following the march and heavily armed RUC officers overlooking the route.

The march, organised by the Bloody Sunday Initiative, came at the end of a week of events in the city on the them 'One World, One Struggle' to mark the anniversary of the massacre. Thousands of people marched from the Creggan Estate, through the Bogside and into the Guildhall Square in the City Centre - the planned destination of the 1972 demonstration. As well as contingents from different parts of Ireland, there were supporters from Britain, Germany and elsewhere. A huge 50-foot long banner proclaimed 'We are the people of struggle, ours is the culture of chnage'. Relatives of those killed in 1972 marched at the front, and pictures of the dead were carried by marchers, as well as being displayed on murals along the route). At the end of the route a large crowd listened to speeches from Gerry Adams and Bernadette McAliskey.


Young children threw bottles and stones at the police vehicles (already colourfully decorated by paint bombs), but apart from this traditional local custom there was no trouble. However on the way back to Belfast, a window was smashed in our bus by Loyalists. Two people had to go to hospital to have their eyes examined for glass injuries. Within ten days of the demo three people had been killed by an RUC officer at Sinn Fein's Falls Road offices in Belfast, and five more people had been killed by a pro-British loyalist gang in a bookmakers shop in Belfast's Ormeau Road'.


So is Bloody Sunday now only of historic interest? No, it is a reminder of the murderous ruthlessness of the establishment when it thinks it may be losing. Prime Minister Edward Heath and the top brass of the army sent the soldiers in that day, and none of them were ever held to account. And in these times when we are supposed to believe that all soldiers are 'heroes' and to welcome the army without question into our schools and our streets, we should not forget that one of their historic functions is to kill civilians when the police lose control.

Bernadette McAliskey told the 1992 rally: ' I remember coming down that hill on that day 20 years ago. People were thinking "What can they do to us?", we are still here after internment and after gassing. But Billy Gallagher said to me "There will be murder in this town before the day is out'. And there was... On that day we knew real, naked fear for the first time. When the bullets were fired, people dived to the ground and crawled away like dogs in fear of their masters... Something else, an innocence died on Bloody Sunday. It was then that we realised that governments kill people'.

The best known song referring to the events is U2's somewhat ambivalent Sunday Bloody Sunday. John Lennon and Yoko Ono recorded a different song with the same name on their 1972 album Some Time in New York City:

Is there any one amongst you
Dare to blame it on the kids?
Not a soldier boy was bleeding
When they nailed the coffin lids