Jamie Potter (http://twitter.com/jamiepotter) gives us the low down on 21st century nights out in Hull, Leicester and Leeds.

1. Can you remember your first experience of dancing?

I have a strange relationship with dancing. I bought my first decks when I was 15 but I was about the only person in my school/town who had any interest in dance music so parties and club visits were non-existent. When I first started going out drinking there were small dancefloors in some of the bars with cheesy DJs playing horrible cheesy music. I was generally reluctant to dance as I was scared of looking like an idiot, though if I saw an attractive girl on the dancefloor I was occasionally tempted into some awkward shuffling that barely registered as 'dancing'.

My first 'proper' dancing experience will have been at either Spiders or Welly in Hull, I can't remember which. Both are rock/indie clubs catering to very young crowds. As I said, I was mainly into dance music but I also liked a lot of rock music and most of my friends were into it, so it was a scene I felt comfortable in. Some and friends and I, while in sixth form, got a train over one night and I remember actually dancing to the likes of Rage Against the Machine and At The Drive In.

2. What’s the most interesting/significant thing that has happened to you while out dancing?

At Gatecrasher Summer Soundsystem in 2008 somebody died after taking drugs in one of the tents we'd been dancing in at the time. I think they had a heart attack. We weren't aware of it until a few hours later when word got around the campsite, at which point we were all chilling out by our tents. I wasn't taking drugs that weekend, I don't really like or need them, but everybody I was there with was on something or other, so the news hit home a bit and led to some glum faces. Though, of course, a few hours later normal service had been resumed.

Getting lost in the music, there's only the here and now, the world doesn't exist beyond the four walls (or railway tunnel...) and the range of the speakers. Tapping into the groove of the music that transcends individual tracks, like a pulse, with this record pulling you to this side and the next record tugging you in the opposite direction. Warmth, sweat, skin on skin, jostling and bumping. Timeless.

5. Can you give a quick tour of the different dancing scenes/times/places you’ve frequented?

As previously mentioned my first dancing experiences were among the rock and indie clubs in Hull when I was 17 or 18. The party scene in my home town was pretty non-existent with house parties an excuse to drink rather than dance. I remember DJing at a friend's house party, my only house 'gig' back then, and I was essentially playing background music.

Things changed when I started university and I began going to my first 'proper' nightclubs. These were often to see drum and bass/hip hop/breakbeat nights, usually in small, sweaty venues like the old Po Na Na or Charlotte in Leicester. Such gigs were nearly always dominated by white males, despite the cultural mix of Leicester. The large number of music technology students also contributed to the crowds at these gigs.

At the same time, I was also going to the cheesy student nights with my wider circle of friends, who tended to be fairly disinterested in dance music, especially the house and techno I love. These nights were always bigger, drink fuelled and soundtracked by chart hits and classic cheese like the Baywatch theme. There would be an even mix of girls and guys in what I could only really term a cattle market - people on the prowl for members of the opposite sex. I couldn't stand these nights out and only went along because my social life would be non-existent otherwise and I tended to depend on copious amounts of drink to get me through them.

Further in to my uni life I started working at some cool bars in Leicester, often finishing in the early hours of the morning and hitting one of a couple of late night bars until 7 or 8 in the morning. Both were fairly small places, frequented by bar staff with a nice community feel. One, the Basement, played funk, ska and soul and was a refreshing change to all the crap elsewhere. The other, Esko, started as a members only space and soon grew into a hot, underground club pulling in some of the finest drum and bass and dubstep DJs.

Working a bar every weekend often meant I missed a lot of the big gigs elsewhere. In my final year at university I started DJing out a bit more getting a set at a tiny bar in Leicester called The Hub which had a great DIY feel and regular bunch of customers. House parties, again, were danceless affairs despite asking for my services as a DJ. Around this time I started falling out with the scene. Drugs were integral and it was very cliquey. If you weren't quaffing MDMA it was hard to integrate and I found most of the people boring. I'm personally very political and found the lack of politics, the rape jokes, materialism, sexism and so on really uncomfortable. Similarly, the clubs and gigs seemed to be dominated by faddish music (tropical etc.) and were all about getting off your tits, dropping tune after tune, which I like in moderation, but I was yearning for more nuanced music and sets from techno DJs and the like.

Since then and finishing university I've been floating around following jobs or postgrad degrees and haven't really settled down yet. Subsequently the dancing has had a hit too, being few and far between.

6. When and where did you last dance?

Aside from a shuffling my hips while mixing in my bedroom, it was unfortunately a while ago now, at the Brudenell in Leeds for Jeremiah Jae, Tokimonsta, Teebs and Daedelus. 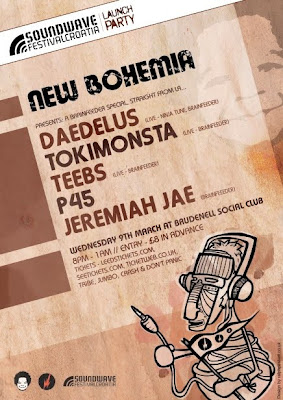 I went along with a friend who usually listens to folk, indie and punk/riot grrl so it was an eye opening experience for her and it was nice to be the one who drew her out of her comfort zone, to share some new music and experiences with her. I distinctly remember she asked during the warm-up set, while we were sat drinking, how on earth you dance to such music. But as soon as Jeremiah Jae took to the decks and the crowd swelled she just started dancing without any kind of prompt or 'education', it just came naturally. Great night!

7. You’re on your death bed. What piece of music would make your leap up for one final dance?

That's a tricky one to answer. I have many favourite pieces of music for dancing to, but with something like techno, which is some of the music I listen to and mix the most, they're not records that I'd immediately jump up and dance to. Rather, I find with a lot of techno and other electronic music that the urge to dance follows on from all the music that has come previously in the set. There has to be a groove, so to speak. So I may hear a track that I absolutely love, but if I haven't been 'warmed up', if I'm not in that dancing trance, then I might not feel that immediate urge. Saying that, I remember walking past a tent at a festival and hearing Vitalic's performing Pony live and I just left my friends and ran into the tent.

To get back to the question though, there is music that does make me jump right up and that's usually hip-hop/funk kind of stuff. So, death bed track? That would probably have to be Hip Hop by Dead Prez. Soon as I hear that bassline, my mood perks up.

All questionnaires welcome, just answer the same questions - or even make up a few of your own - and send to transpontine@btinternet.com (see previous questionnaires).
Posted by Transpontine at 6:00 am