The Wind from Nowhere

'The dust came first. Donald Maitland noticed it as he rode back in the taxi from London Airport, after waiting a fruitless forty-eight hours for his Pan-America flight to Montreal. For three days not a single aircraft had got off the ground... The great passenger terminus building and the clutter of steel huts behind it were clogged with thousands of prospective passengers, slumped on their baggage in long straggling queues, trying to make sense of the continuous crossfire of announcements and counter-announcements' . 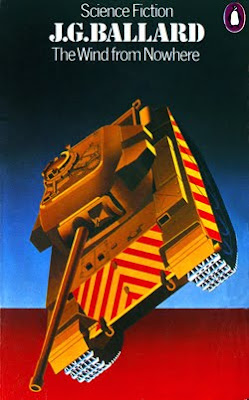 The opening passage of JG Ballard' s The Wind from Nowhere put me in my mind of the recent grounding of aircraft as a result of the dust cloud from a volcano in Iceland. In this novel, the problem is a terrible, accelerating wind that sweeps across the whole world, ultimately levelling most of the built environment while the survivors cower underground.
This was Ballard's first novel, published in 1962 (I have been reading the Penguin edition, pictured, first published in 1967). He later disowned it as 'hack work', but there are some familiar Ballardian themes - chiefly his evident pleasure in describing the collapse of civilisation. For instance, in the chapter 'Vortex over London': 'Nelson's Column was down. Two weeks earlier, when the wind had reached ninety-five mph, a crack which had passed unnoticed for seventy-five years suddenly revealed itself a third of the way up the shaft. The next day the upper section had toppled, the shattered cylindrical segments still lying where they had fallen among the four bronze lions... As they turned into Charing Cross Road Marshall noted that the Garrick Theatre had collapsed' etc.etc.
New York gets it too: 'Apparently New York is a total write-off. Manhattan's under hundred-foot waves, most of the big skyscrapers and office blocks are down. Empire State Building toppled like a falling chimney stack. Same story everywhere else. Casualty lists in the millions. Paris, Berlin, Rome - nothing but rubble, people hanging on in cellars'.
Posted by Transpontine at 6:00 am

I have always felt Ballard had something of the "pre-cog" about him, the ability to discern the shape of the future as it casts its shadow back onto the present.

While I have scanned many of his interviews, autobiography et al, I have found nothing overt pointing to any overt 'psychic' ability to scan the matrix of possible futures and yet one only has to read his novels to see he had an uncanny ability to describe the 'flavour' of the future, if not actual events.

Like PK Dick (most definitely a pre-cog, just check out the story of him diagnosing his son with a rare illness just in the nick of time) I have always had the uncanny feeling that 'truths' are more likely to be found in scifi comics, pulp fictions or 'hack novels' (to use JGB's own term for this book) than they are in 'serious' literature....so maybe the reason Ballard disowned this book is because deep down he knew it painted a future he once glimpsed in a moment of hypnogogic revelry.

Hugely speculative I know but at a moment when the 2012 meme is reaching omega point and according to internet rumours, Shell may be planning on using "controlled" nuclear bombs to 'fuse' the bedrock where the oil is leaking through with a possibilty that it may ignite the thick layers of methane at the bottom of the ocean causing a global firestorm....

Maybe the reason JG Ballard disowned the novel was not for the reasons he gave, maybe he felt it was too close to a future truth for comfort....global Crash.....

Hi, there, just catching up on some of your old posts...and the interesting comments too.

I've got to agree with The Saucer People regarding Ballard's precog abilities...

Ballard was a huge influence on me back in my 20s, i.e., the 1980s and early '90s, when I wrote a lot of what I called science fiction myself (but most people in the U.S. especially couldn't recognize as science fiction - just as with Ballard. :) ) ... I also always greatly valued his earlier works, which I think were more lasting and ultimately more profound than the more blatantly "shocking" material of later years. (But still more lively than Ballard after Empire of the Sun...)

I don't remember The Wind from Nowhere too well, as it's a long, long time since I read it. But I reread The Drowned World right after Hurricane Katrina and quoted it extensively on a blog that I was writing at the time.

The Drowned World might prove to be his most prophetic work in real physical terms as well as in deeper social ways.

Re. P.K. Dick, never liked him as much, mainly because I found his prose to be a bit loose for my tastes. While Ballard's prose sometimes annoyed English language purists, I always found it to be marvelously precise, in a way that did not did not directly convey real "journalistic" perceptions but, rather, always made sure to be just a bit off. :)