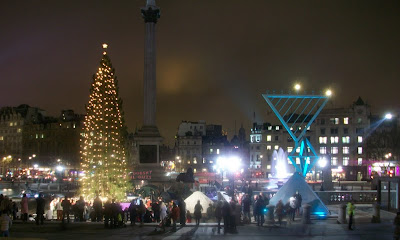 I was in Trafalgar Square on Friday night, where there was a fairly surreal assemblage of sights and happenings. There was the big Christmas tree with carol singers; a giant Menorah for the Jewish festival of Chanukah (right in the above picture); the World Wildlife Fund's London Ice Bear - a melting sculpture to highlight global warming... 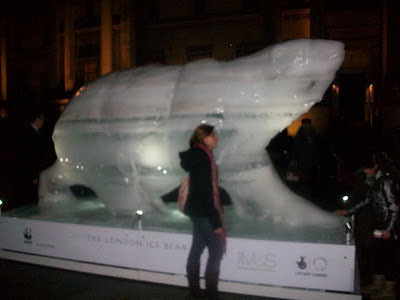 ... and the Climate Camp with similar concerns, while world leaders convene in Copenhagen. There didn't seem to be a lot going on and it was much smaller than the Camp on Blackheath over the summer. I guess the temperature had something to do with that, and the fact that a lot of activists have headed to Denmark. 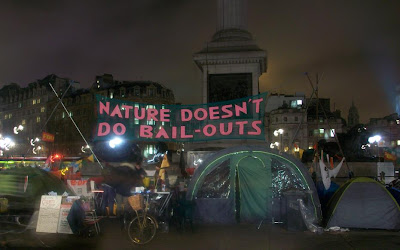 It all put me in mind of the history of this place as a focus for all kinds of collective celebration and protests in London, from the Bloody Sunday demonstrations of 1887 to the poll tax riot in 1990, from dancing in the fountains on the anti-Criminal Justice Act demo (May 1994) to dancing outside the national gallery on the Reclaim the Streets 'March for Social Justice' demo (organised with the striking Liverpool dockers) in April 1997 - pictured below: 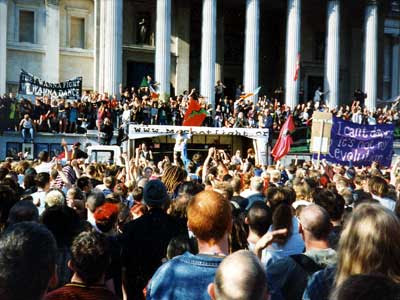 Hymns, rebel songs, slogans, speeches, sirens, smashing glass - if only those Trafalgar Square stone lions could tell of all they have heard.
Posted by Transpontine at 6:00 am

Email ThisBlogThis!Share to TwitterShare to FacebookShare to Pinterest
Labels: London