'KUALA LUMPUR, Sept 5 2009- Police who raided a karaoke cum mini discotheque in the city early Saturday morning, found 37 revellers under the influence of drugs. What was shocking was that more than half of the revellers inside the mini disco were Muslims who were either drunk or under the influence of drugs and showed no respect for the Holy month of Ramadan. The raid, headed by ASP Mahani Mohamed from the Kuala Lumpur vice, gambling and secret society branch (D7) also found 14 police officers among the revellers at the New Universal KTB or more popularly known as Laiketong in Taman Maluri, Cheras at 7.30am. 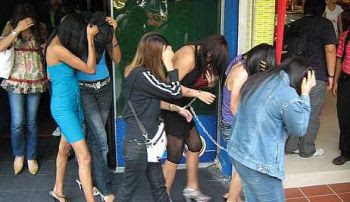 During the raid which lasted until 1 pm, 118 revellers at the three-storey entertainment outlet were screened and from the 37 who tested positive for Ketamin, Eramin 5 and syabu, were 21 women, including three Indonesians and one from Laos. Police also found 10 rooms that had been turned into mini discotheques for revellers who were Muslims. The owner of the premises would also be referred to the City Hall for operating well past the operation time allocated'.

(photo of women leaving the club from Malaysia Star)
Posted by Transpontine at 6:00 am