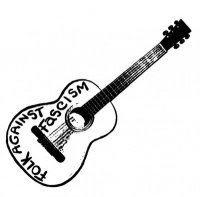 The majority of folk musicians I have met have tended to be some kind of lefty/liberal/anarcho/counter-cultural type, and indeed the same goes for many of the people involved in Morris dancing and other folklore-related events. But the British National Party is trying to shift this, advising its activists to get involved in these kind of scenes to stoke up some spurious nationalist culture. Lancaster Unity quotes from the BNP's Activists and Organisers' Handbook which states:
"Ideally our units will lead their communities in organising, or at least supporting, cultural events such as St George's Day celebrations (April 23rd). Most regions of the country have cultural events which are unique to that area, or county. For example, Padstow Hobby Horse (sic) in Cornwall, Arbor Tree Day in Shropshire, Garland King Day and the Well Dressing in Derbyshire, the Marshfield Mummers in Wiltshire, the Haxey Hood in Humberside, and countless others.Some such celebrations, now very popular, have only been revived in recent years - the Hastings Jack in the Green and Whittlesea Straw Bear festivals show just how big such things can get. Why not do some research to see if there's a lost local tradition you can inspire a team of enthusiasts to revive?"
Meanwhile, folk musicians are getting increasingly pissed off about the BNP playing their music and selling their CDs to raise fund- both of which are pretty much out of their control. At the recent Sidmouth Folk Festival, Folk Against Fascism was launched to counter this. They say:
'The UK folk scene is a welcoming and inclusive one; folk music and dance have always been about collaboration, participation, communication and respect. Folk Against Fascism has been created to take a stand against the BNP’s targeting of folk music, a stand against the appropriation of our culture. Folk Against Fascism isn’t a political party or a bureaucratic, top-heavy organisation. It is any and all of us who want to make ourselves aware of the BNP’s bigoted view of our history and culture, and who want to do something about it. The BNP want to take our music, want to twist it into something it isn’t; something exclusive, not inclusive. We must not let them. Folk Against Fascism is a way to demonstrate our anger at the way the BNP wants to remodel folk music in its own narrow-minded image'.
There's a Facebook group and much more to come.
Posted by Transpontine at 9:17 pm